Bidet Vs Toilet Paper: Which Is a Better Choice? 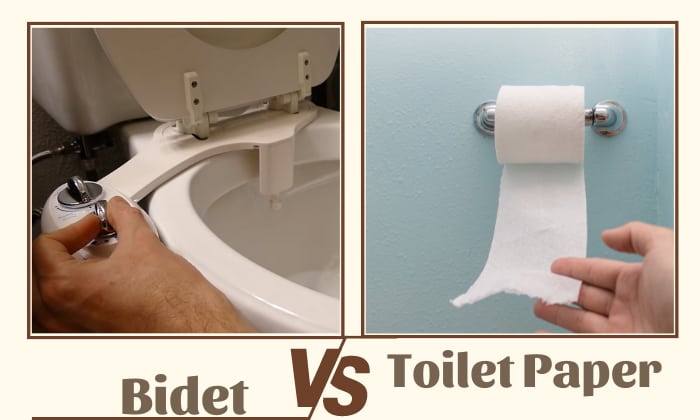 As the practice speaks, Americans are familiar with using toilet paper after taking a dump. They may want to consider using a bidet, which is common among Europeans. So, it’s just right to compare bidet vs toilet paper.

Bidet is an appliance in the bathroom that can wash your behind to get rid of waste particles. Bidet uses water to fulfill its purpose. This is not necessary with toilet paper as it works with the idea that wiping your behind is enough. Are bidets better than toilet paper? Read on to find out if you need a bidet to replace toilet paper.

What Happens When You Use a Bidet

The bidet was invented in France around the 18th century. Just like the toilet, it was first situated in a bedroom rather than the bathroom. ‘Bidet’ is derived from a French word that means ‘a strong horse’. People mimic the standing position of the said animal when using a bidet.

Modern bidets that are on the market these days can be controlled through a control panel or remote. You can set it in a warm water jet mode that comes out with low pressure. It won’t feel good if the water is too cold and strong and these are the reasons why some first-timers think that the appliance doesn’t work for them.

When using a bidet instead of toilet paper, you won’t only feel clean but also refreshed. The water can reach a wider scope so thorough cleaning is done in the bidet’s healthy disposition. It won’t also irritate your skin. You’re free to wipe your behind with toilet paper after using a bidet if you think you need to.

The Story of the Toilet Paper

Newspapers and magazines were used for wiping after taking a dump. In the late 19th century, toilet paper began to become popular in the United States. Some people were not convinced right away but because of the same convenience and softness, they accepted it. When you use toilet paper, you’ll agree that it’s uncomplicated as bulky hardware is not needed. Of course, you’ll have to put it on a roll holder if you please.

The best part about toilet paper is that you can take it everywhere you go. It suits backpackers, preppers, overlanders, and those who don’t find running water at all times. Even though it promises convenience, you have to look at how it’s produced.

The production of toilet paper can chop down more trees and pile up landfills. However, you can find brands that practice sustainability like Caboo Tree-Free Bamboo, The Cheeky Panda, and Betterway Bamboo. Recycled toilet paper and ones made from bamboo are safe choices.

What is It for Toilet Paper vs Bidet?

Is using a bidet better than wiping? The answer can be found in this part as the factors you’re concerned about are laid out. There’s no need to scroll through a lot of comments on Reddit.

1. The cleansing ability and sanitation

The stream of water from the bidet has the force to get rid of any dingleberries. It gives an idea of bidet sanitary pursuit. Moreover, it saves you from direct contact with the waste when cleaning yourself. It’s what a nozzle wash of a bidet can do for you.

You can also do it by using thick toilet paper, which may not wipe up all the bits in one strike. It’s up to you how you clean yourself well. Although you use a bidet, you’ll sometimes need to wipe your butt with toilet paper. It’s when the water splash goes everywhere.

Toilet paper can irritate sensitive skin. Regarding this matter, products with scents and substances that are harsh to the skin should be avoided. However, this consequence is not only exclusive to skin irritation. It’s recommended to use warm water and low pressure when using the bidet to avoid anus irritation. That’s why one must know how to use a bidet properly.

Bidet hemorrhoids are not-existent when there’s a low pressure of water. This was discovered by a small study. Apart from cleaning the anus, women can also use a bidet to clean their genitalia.

Without a doubt, toilet paper is easy to use. You only have to wipe your butt. There are some things that you have to be attentive to. Make sure that you use thick enough toilet paper or you can have several sheets to ensure that you won’t touch the poo.

As mentioned, you need to be on a learning curve to be familiar with bidet. Since bidet works with an infrared connection, someone outside the bathroom can control it.

The first thing that you have to learn is how to set the bidet. Since there’s an instructional manual, you can be guided by it. To achieve a great experience with bidet, you have to use it correctly. Bidet won’t be helpful if there’s no water. Therefore, it’s not wise to have it if you don’t have a constant water supply. Toilet paper will be convenient just like what campers do.

4. Caring for the environment

There’s a big difference in presuming that a roll of toilet paper can last for a week. The carbon emissions from manufacturing and transporting toilet paper should be taken into account too.

Although bidet initially costs more money, it’s cheaper in the long run. You have to pay several hundred dollars for a bidet but it can serve you for years.

To lower the price, you can just buy a non-electric bidet seat like Kohler Puretide toilet seat and American Standard Aquawash. An American household spends $120 or more on toilet paper a year. It may cause clogging so you want to foresee the need to spend money on fixing it.

In toilet paper vs bidet, cleaning ability and sanitation, skin health, ease of use, caring for the environment, and cost is the basis of your choice. The involvement of water makes bidet advantageous, but to make it happen, you have to know how to use it well. Toilet paper is the option when there’s no constant water flow as it’s a situation where the bidet becomes useless. It’s best to buy a sustainable kind of toilet paper.

Glacier Bay vs American Standard Toilets: Which One to Opt?