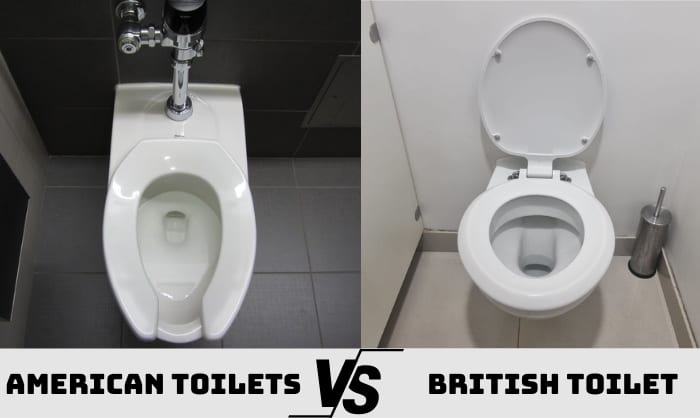 Though there was a time in the past when the British occupied North America, people in these places didn’t have similar customs and traditions. Also, there’s a difference between British toilet and American toilet. A British toilet has a large hole to let the waste go smoothly. It doesn’t have much water when not in use compared to the half-filled American toilet.

An American toilet has a smaller hole and the flush is gentler than the strong water current of the British or England toilet. There’s more to learn in UK toilets vs US toilets, so continue reading. 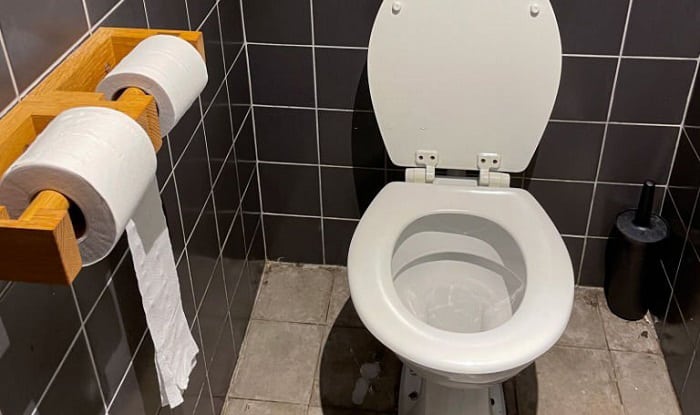 The British toilet name has other terms such as loo, restroom, and bathroom. You may also hear the word ‘lavatory’, but it was used in the past. A public restroom in England has signs on the door that say ‘Ladies’ and ‘Gents or ‘Male’ and ‘Female’. Communal toilets are not frequently seen around the country. The round toilet bowl is common though.

Men should know that there are no urinals in public toilets. They should be responsible when lifting the seat before aiming for the toilet. In British bathrooms, women on a homestay should be aware of the sanitary waste bin. It’s best to wrap a used item even with just tissue before throwing it in the bin. Flushing is not a wise option.

A British toilet has a large hole at the bottom to send the waste to the sewer. It’s also referred to as a washdown toilet since gravity has a main role in getting rid of waste. As the tank empties, the water moves rapidly and strongly for efficient flushing. This is the pro of the British toilet, while its con is the possible splash back when taking a dump. To avoid this, you have to put toilet paper in the bowl before sitting on the toilet. 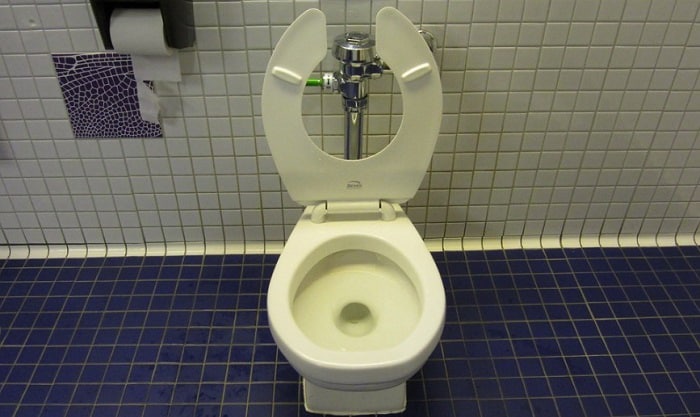 Some British expats notice that American toilets are filled with almost half or 3/4 of the bowl. They would also be surprised with the elongated toilets available. Moreover, they wonder if it makes a difference with the round bowl. Some users find elongated bowls more comfortable with extra space on the front. But it takes up more space.

The pro of American public toilets is the U-shaped toilet seat. This was mandated to let women clean their genitals without touching any remaining germs. It’s also a way to easily clean the public toilets because some don’t have the seat cover that is seen in American bathrooms.

An American toilet has a smaller hole at the bottom and it flushes gentler. It works with a siphon system which makes the water come right back before completely going to the sewer. Hence, the con of this toilet starts with this feature. This system is prone to clogging, so some foreigners wonder why a plunger is seen beside an American toilet.

The Differences Between British Toilet and American Toilet

Spotting the differences between toilet British vs American will help you further understand the functions of these two toilets.

It’s recorded that Americans use the most toilet paper than the rest of the world. A roll of toilet paper is a must in American bathrooms. If this is an environmental concern for you, there are available toilet paper brands that are sustainable like The Cheeky Panda Bamboo Tissue Paper, Betterway Bamboo Toilet Paper, and Marcal Toilet Paper.

The British clean themselves by using a bidet which is installed next to the toilet. A bidet is a standalone fixture with an oval basin that sprays water to clean a person’s genitals and behind. It’s always available in homes, but not all public toilets have it. So, it’s best to have tissue or toilet paper with you when traveling in the UK.

The general perception about flushing the toilet is that the water pushes the waste downward to reach the sewer. This is true with the toilet in the UK that works with a washdown system. The water’s weight and gravity go hand and hand to push down the waste. A British toilet has pipes that are twice as wide as American toilets. Apart from efficiently flushing the toilet, clogging is unlikely to occur.

A different flushing system is adopted by American toilets and it’s called the siphonic flushing system. There’s a long narrow trap that is either in the shape of P or S. One end of the trap is linked to the toilet while the other end is with the drain pipe behind the toilet. The power of the siphon is great as it can get rid of massive waste. After the flush, there’s a gurgling sound which means that the water tank is filled and ready for the next flush.

The design of an American toilet is prone to clogging. There’s a high chance of clogging if someone accidentally drops things in the toilet.

It’s typical for British toilets to have dual flush due to the aim of conserving water. The first button is for liquid waste and the second is for solid waste. Some American toilets are dual flush but some work with one flush that only requires 1.6, 1.28, or 1.0 gal per flush.

Related: Dual flush vs single flush toilet – which one is better?

4. Types of toilet, spaces, and partitions

In the USA, there are urinals and standard toilet bowls in public restrooms. These urinals and toilets are in American toilet stalls with division. However, it can make a British person uncomfortable due to the gap above and below each stall. The stalls are added for privacy but it seems that it doesn’t completely serve their purpose. Foreigners also find the lock unsafe and anyone can open the door wide at any time.

European public toilets and urinals have divisions. Each toilet is placed in one room as there’s a full wall. You’ll find them with locks but it’s not the same in household toilets. If you’re staying at a friend’s house in the UK or a homestay, it’s best to knock before opening the door as toilets in some households don’t have locks. When using the toilet, close the door while doing your business.

5. The water in the bowl

British people are surprised to see the half-filled American toilet bowl, especially witnessing how it flushes. They don’t want to accidentally touch or be splashed with toilet water. Overflowing water with waste is also not a desirable thing when an American toilet clogs. A British toilet only has a little water in an idle toilet. But it can have a splashback when taking a dump.

Most American public toilets are free of charge. In the UK, you have to pay a fee. You can’t avoid it if there’s an attendant who manages the tip jar. There are coin-operated toilets in big and major cities and they’re guaranteed sanitary.

With every country’s distinct culture and customs, there’s indeed a difference between British toilet and American toilet. The flushing system, water that stays in the idle toilet, and water consumption are not the not only factors that define each toilet. The set-up of public toilets also varies. After cleaning is also different as Americans depend on toilet paper and the British have the bidet.

Can You Flush the Toilet When the Power is Out? – Answered

How to Tell if Your Toilet is Leaking Underneath? How to Fix?