Elongated vs Round Toilets: Differences and Comparison

Toilets are not in the same form because some are bigger or longer than others, and thus, need more space. This is one of the factors that help you choose the right one for your bathroom.

Buyers are also concerned about the toilet’s appearance as it’s integral to any bathroom theme. That’s why this elongated vs round toilets article is made to clarify things. It will allow you to get a suitable toilet for your bathroom space and theme.

The comparison of round toilets vs elongated toilets will include the pros and cons of each. So, you’ll have enough information to make a good decision.

Know the Difference Between Elongated and Round Toilet

The elongated bowl usually measures 18.5 inches and the round type is 16.5 inches. Due to extra sitting space, the former is more comfortable but it’s not as space-efficient as the latter.

Elongated or round toilet?

The need to buy a new toilet usually happens after several years. Thus, it’s reasonable that you conduct thorough research before making your final decision. It may take some time because of the array of toilets in the market.

After you figure out the difference between elongated and round toilet, think about everyone in the house, such as your kids, the elderly, or those who have mobility constraints. When installing a toilet in a public place, there are codes and standards that you have to follow.

A round toilet is a match for small washrooms or toilets. It’s also what the kids need in their bathrooms. As for the elongated toilet, it’s suitable for larger washrooms, specifically, the master bathroom.

Changes occur to everything including the technology used in toilet operations. Thus, toilet manufacturers leap forward with innovation. Despite new creations, the comfort that an ideal toilet provides to its user is not compromised.

But you must confirm the toilet dimension as indicated by the manufacturer. I said so because many created a wide range of toilet lengths that deviate from the usual measurements of elongated vs round toilet dimensions.

In most building codes, the front side of a toilet should measure around 21 inches. It’s 48 inches to make it an ADA-compliant toilet and more room may be required in some metropolises and cities.

Be aware that with a small bathroom, the two-inch space that you can save can either let you pass or fail a certain building code. Still, many washrooms contain round toilets and get the most of the advantages from their role and application.

The different forms of toilet bowls are created to fulfill the needs of every user. The bowl-type is linked to other features, such as one-piece or two-piece design, skirted bottom or non-skirted, and particularization of the lid.

It contributes to the toilet’s structure as well as the overall appearance of your bathroom. You can make use of the circle shape of the round toilets while it’s an oval shape from elongated toilets.

As elongated toilets are installed in large washrooms, they offer a modern appeal. Round toilets, on the other hand, give off a classic, minimalist effect in smaller washrooms.

Round vs elongated toilet seats will also show you that they’re used in several ways. Normally, elongated toilets are deemed to be the epitome of comfort due to the larger bowl. Individuals who struggle with mobility issues benefit a lot from them. They no longer struggle to sit and get up from an elongated toilet.

To complete the toilet installation in commercial spaces, you have to comply with local rules and regulations. You’ll discover that most buildings require a gap of twenty-one inches from the front wall to the toilet.

ADA or Americans with Disabilities Act requires two inches more on the usual toilet height which should be away from the wall by forty-eight inches. Concerning this requirement, the two-inch extra measurement on elongated toilets can comply or violate. Eventually, you’ll stick with round toilets for a smaller washroom.

These toilet bowls have a similar installation process. But you need to spend some time connecting separate tanks and bowls. A wax ring needs to cover the waste pipe for a toilet bowl to be raised over the section where a minor angle is created.

Next, you have to apply pressure once the sides are placed in the appropriate position. To ensure that the whole toilet is intact, add the screws. After this step, you’ll see the tank bowed up on the wall. When doing an elongated toilet, moving and lifting can be tiring. This is the small difference that I’ve observed so far.

Some people assume that round toilets have stronger flushing power than elongated toilets. Consider it a myth since there’s no definitive test to prove it. Be reminded that flushing power capacity is based on the technology created by the manufacturer.

At the present, the flushing system is powered by double-cyclone or pressure. An excellent pressure applied in elongated toilets instills a strong flushing power. This results in water circulation powerful enough to flush down waste. Not much difference can be detected from their performances when they’re both installed correctly.

Having an elongated toilet will let you deal with a fissure on the bottom part of the bowl. This is not a typical thing on a round toilet but it’s the part that makes it easy for you to access the bowl when using a plunger or brush.

You’ll also find it straightforward to see the bowl’s front interior due to its extended shape. Thus, it’s just right to say that elongated toilets are much easier to clean than the round ones.

As mentioned, elongated toilets go well with modern aesthetics. Many users like them more than the old-fashioned round toilets. But it depends on your preference and the atmosphere that you want to create in your bathroom.

Comfort is one of the main concerns before buying a toilet. The extra space on an elongated toilet is much-needed support for some individuals. This feature boosts the comfort that this kind of toilet can offer. But the sought-after comfort from elongated bowls is not relevant to some people. Children prefer round toilets as they feel like falling when sitting on an elongated toilet.

When a new house is built, an elongated toilet is likely to be installed in its bathroom since you can avail of it in any store. The level of availability may surprise you when shopping for a toilet. Honestly, it’s not easy to make a round toilet fit your bathroom theme.

Manufacturers would produce a certain model with elongated and round bowls at the same time. Surprisingly, the former is more expensive despite the high amount of availability.

As an example, a two-piece round toilet with 1.28 GPF and classical styling only cost $180. But it’s $230 for an elongated toilet in the same model. After I went through various brands, the price range of round toilets is from $225 to $310.

The elongated toilet is a bit higher from $275 to $360. What you need to spend on the installation of both toilets is the same. It’s around $45 to $130 including the liability to the pipe’s condition and location.

Excellent Selections of Elongated and Round Toilets 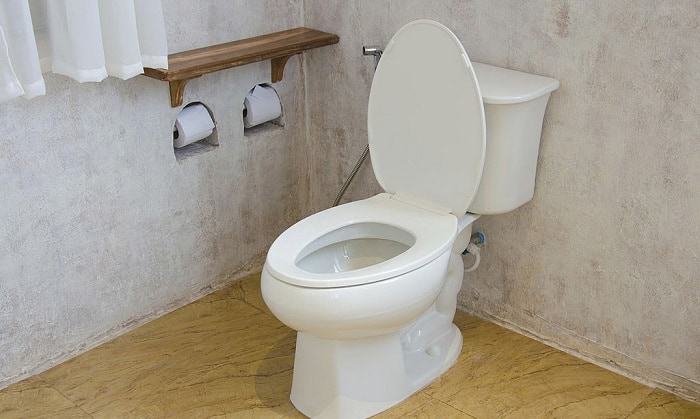 To make it easy for you to choose which toilet elongated vs round, here are the excellent selections.

This one-piece toilet with an elongated bowl is WaterSense certified. It’s not only available in basic white and black but also other hues to allow you to match it with your bathroom’s interior. It works with a 1.28 GPF and Tornado flush system. These features make it an ADA-compliant toilet. The bowl height is 16.25 but it turns into 17.25 with the seat on.

It’s another outstanding example of an elongated toilet due to its comfort height and one-flush system. You can depend on its powerful flushing system that can flush down even heavy waste. It needs 1.6 gallons of water per flush. Most users like it as it’s budget-friendly.

Due to its skirted exterior, you can describe this dual-flush elongated toilet as an eccentric model. You’ll love this if you’re not into cleaning toilets. With its smooth surface, it remains clean for the longest period and you won’t need to clean it frequently. Even its quiet flush can clean the interior part very well. I like that this toilet doesn’t make much noise including its toilet seat that is not prone to slamming.

You’ll be impressed with how this innovative round toilet fits in any small washroom. The flushing system is superb too! A small amount of water can get rid of the waste efficiently. The quick-release seat doesn’t create unnecessary noise so no one will be bothered when you use it.

This toilet model won’t disappoint because it’s water-efficient with a strong flushing system. It’s ADA compliant so you’ll find it functional for sure. The sleek and modern appearance will please you as well.

Known for its powerful flush, it’s surprising that only a small amount of water is needed in every flush. Clogging and blockage won’t trouble you as it has a wide trapway.

Are You Ready to Choose

You now have enough knowledge of elongated vs round toilets. So, you can decide on the most suitable one. Round bowls are ideal for smaller washrooms while elongated toilets are for larger spaces.

If you’re furnishing a bathroom for children, it’s best to get the round-front toilet. You can check out the top-pick toilets mentioned above to save time and effort in researching.