P Trap vs S Trap Toilet: What Makes Them Different? 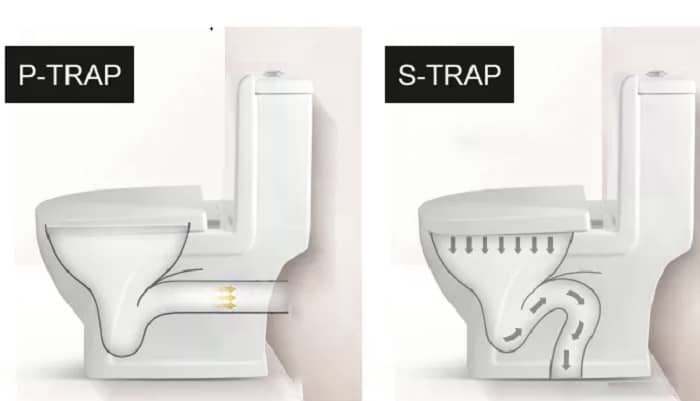 At some point, you’ll realize that your toilet nis outdated or it frequently gives you troubles. The need to upgrade involves the P trap vs S trap toilet as it’s not only about the aesthetics and flushing power of the toilet. These toilet traps block the water, waste, and odor from coming back up.

The p trap is a match for toilets that are mounted on the walls and on the top floors.

Their names are based on their tangible shape. Aside from these short descriptions, s-trap vs p-trap should be given attention so you can get the right one for your toilet.

Why Would You Prefer a P Trap?

If you think about the letter ‘P’, it will make a passage that goes down, turns into a curve, and goes straight. Apart from toilets that are mounted and located on top floors, this trap is also linked to laundry and kitchen sinks.

There’s a wide range of applications because the proper p trap configuration is efficient and consistent. Moreover, it doesn’t easily dry out and loosen the seal.

A P trap can make a natural water seal. So, the water can proceed to the overflow but it won’t return to the toilet bowl. The seal at the bottom of the P trap does an excellent job of preventing backflow. Therefore, sewer gasses that bring unpleasant odor won’t come out of your toilet and ruin the ambiance of your bathroom.

P traps prove to be efficient and consistent when maintaining water traps. Cylinders composed of five rows are ideal, but they depend on the amount of water that passes the pipes. In terms of P traps, larger pipes are better for catching water.

Although it’s relatively easy to install a P trap, it’s still not a good decision to do it on your own. You must get a professional if you’re not sure about what you’re doing. This is to ensure that the trap works without causing inconvenience. The correct installation has a perfect outcome but you have to pay a professional fee. Even though you spend an extra amount on installation, it’s worth it.

The Service of S Trap

The pressure present in the toilet can make the water go down and come right back. Furthermore, the bend on the ‘S’ traps the water under it and prompts it to flow further downwards to the sewer.

Aside from the definition, you should know that it’s the oldest trap toilet so it’s present in the toilets installed on the floor. There’s more room on its waste outlet and it’s the feature that makes it a match for ground-level toilets.

When s-traps banned status is known, the plumbing fixtures that are not vented are to blame. DIY kitchen sink and basement bar sink shouldn’t be allowed as the old steel drain attached to the wall corrodes. If there’s a new drain installation, there’s no removal of the old drain, which results in blockage.

As mentioned, the purpose of adding a trap is to block gasses and rodents from getting into your bathroom. When the water remains in the trap, the sewer gasses also stay in the same place.

You may have noticed nasty odors in a bathroom that is rarely used because the water in the trap may have evaporated. The next thing that happens is that the sewer gasses enter your house. So it’s ideal to have a S-trap with a vent.

An S trap has an air filter so sewer gasses won’t flow back to your toilet.

Based on its straightforward design, the pipe is under the toilet and connected to the trap. The same drain pattern is also applied to sinks.

When an S trap dries out, the sewer gasses are released from the toilet as well as a bad odor. Bacteria build-up can also happen in this type of trap so you can have toilet issues like the disgusting odor. Furthermore, it’s not easy to clean. The only choice might be a replacement, which can be costly.

When a user drops something in the toilet, it will end up in drain blockage.

Although the S trap has a straightforward design, it can easily dry out so an unpleasant smell can be detected from your toilet. The P trap design can block the water and gasses from coming back to the toilet.

P trap has an edge over the S trap in this factor as the latter tends to dry out. With a a larger diameter attached to the P trap, catching water is efficiently done.

P trap excels in this aspect because of its water seal. S trap can also do it with its air filter, but it all fails when it dries out.

You should hire a plumber whether for the installation of a P trap or an S trap.

As mentioned, it’s still necessary for the P trap despite the ease of installation. S trap necessitates glue to be connected with the pipes. It seems easy but it’s challenging so it’s best done by a professional.

Since a professional is recommended to do the installation, spare an extra amount for an appointment when you choose either of these two traps.

How to Convert S Trap to P Trap

You may want to switch from S trap to P trap if your toilet is giving you a lot of trouble. Two kinds of drain need to be changed and a waste arm extension and the necessary vent should be added.

You can opt for AAV or valves for the vent. Of course, you need a complete S-trap to P-trap conversion kit with custom configurations.

The S-trap to P-trap conversion cost is the total cost of valves and the conversion kit. You can get AAV from OATEY, Studor, and TUUBER. A plumbing diagram is available in the necessary components to help you convert an S trap to a P trap.

In the P trap vs S trap toilet, the former is more advantageous since it’s efficient in blocking sewer gasses that can bring a disgusting odor to your bathroom.

S trap is common among floor toilets but the good news is that you can convert it to a P trap. This procedure is necessary sometimes, like when the S trap keeps on giving your problems.

Bleached vs Unbleached Toilet Paper: Which is Better?