Why is My Toilet Bubbling When the Shower is Running?

A toilet gurgling as you are taking a shower is, to say the least, a peculiar scenario. You might have asked yourself, “Why is my toilet bubbling when the shower is running?” as you pondered to find out what causes such an occurrence.

The reason a toilet bubbles when shower runs is usually wet venting or blockage in the toilet drain, sewer line, or vent pipe.

Why Does the Toilet Bubble When I Take a Shower?

One unwritten plumbing rule is to individually vent each drain. Not many households, though, have the luxury of having enough space or money to pay for separate vents. The toilet and shower sometimes share one vent and drain in living spaces.

This system of choice might function just fine—but not until there is a blockage in the pipeline. Whenever there is a clog in pipes, the water flow is hindered, consequently leading to pressure accumulation.

As this goes on, the trapped air in the pipe is compelled to find an escape route. Without another vent to turn to, the air goes through the toilet instead, resulting in toilet gurgling and smells.

Similarly, when too much water is in your shower pipes, trapped air will try to escape, leading to bubbles coming out of shower drain.

Drain blockages can be either partial or total. Toilets that are just starting to bubble when the shower drains are an indication of a partially blocked drain.

When it persists bubbling and won’t flush at all, the drain may be completely blocked, which is very annoying if you’ve just relieved yourself.

Numerous factors might result in a drain blockage, but dirt and hair accumulation, mineral buildup, and tissue paper deposits are the most typical ones.

Whichever the cause is, it produces similar results—the accumulation of pressure and trapping of air.

Plumbing extends beyond drain pipes, and a clog in the larger system, the sewer lines, can cause even bigger issues, including a toilet won’t flush, bubbles coming from the shower drain or toilet bowl, and even a bad smell emanating from the toilet.

Since every drain pipe in your system passes via the sewer line, it is very possible that it will also be impacted if any of the individual pipes in your system slows down or becomes clogged.

In addition to the typical source of blockage from unwanted debris, sewage line issues can also be brought on by tree roots or soil encroaching on the pipes, and aging ducts that lack dimensional stability.

The vent pipe’s obstruction is another thing to take into account. In fact, this is the most likely explanation when the shower is running septic and the toilet is producing bubbles.

Your fixtures’ drain and sewer lines are connected to the vent pipes. If birds, leaves, or any other object blocks your vent opening, the air and gas from the toilet won’t flow out naturally.

As a result, the toilet becomes the only place where they may escape, which is why bubbles appear.

How to Troubleshoot Air Bubbles in the Toilet Bowl

By taking into account the following procedures, you can attempt to fix a gurgling toilet on your own:

To do this step correctly, use duct tape to seal the other drains, which will keep the pressure inside the target fixture and make the unclogging attempt smoother.

Why Call a Professional to Fix the Situation? 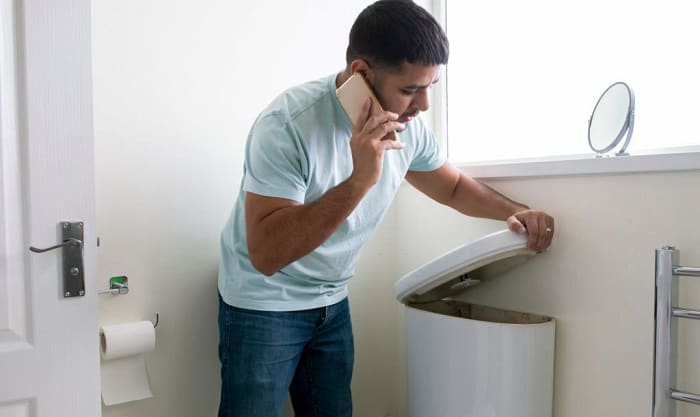 Does a gurgling toilet fix itself? The obvious response is, of course, that it does not and cannot. It needs to be fixed, either by you or the most qualified person to offer the intervention, a professional.

It is always advisable to call a professional to address the situation because they offer a more effective and efficient repair operation.

Additionally, when the problem is very bad or complex, a professional would best handle it to prevent further problems from arising along the way.

Imagine you’re listening to music while showering, only to hear your toilet gurgling and see bubbles in toilet bowl. When such a thing happens, you’ll probably ask yourself: “Why is my toilet bubbling when the shower is running?”

Read, comprehend, and find the best solutions here to solve the problem before it escalates from a bad event to a worst-case scenario.

Why is My Toilet Leaking From the Bottom? – 5 Causes

Why Does My Toilet Randomly Run For a Few Seconds? – 10 Reasons