Skirted vs Non-Skirted Toilet: Which One Is Right for You? 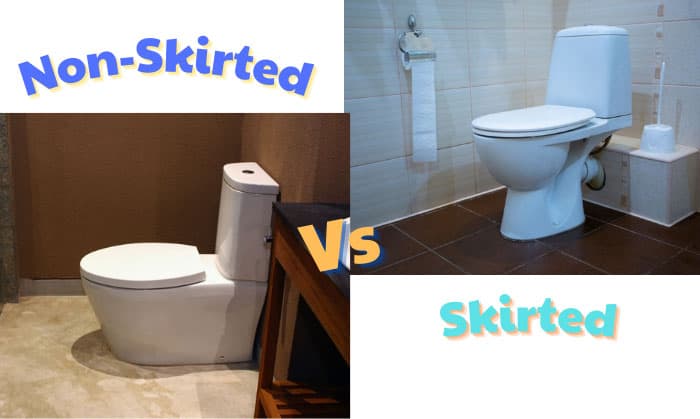 You have to weigh skirted vs non-skirted toilets when deciding which toilet to purchase. The comparison of these two toilets is focused on whether the trapway is hidden.

Skirted toilets have an apron that conceals the trapway for a sleek look. As the name suggests, non-skirted toilets are the opposite. The trap ways are exposed so you can see the S shape and ridges.

Based on this difference, it will be easier to clean the skirted type. But there’s still room to appreciate regular or non-skirted toilets. Furthermore, you have to know that the skirted feature is combined with a traditional structure. Find out more as you continue reading. 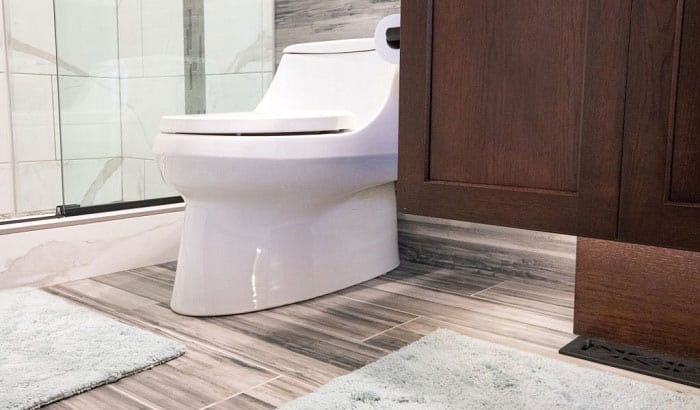 When looking at skirted toilets vs regular or non-skirted toilets, the features of the former should be emphasized. It’s because this topic focuses on the structure and you may be particular with the regular toilet at the same time. Moreover, it’s a way to clearly point out the differences between these two forms of toilet.

You’ll still get to analyze the parts of the regular toilet so you can figure out which will work for you. Unlike the regular toilet, the fully skirted toilet has a hidden trapway. An apron for covering gives it a seamless look. It’s ideal for those who are after a minimalist concept and those who are not fond of digging into every crook and cranny when cleaning.

You must know the skirted toilet’s pros and cons. After the pros are mentioned, the cons will be laid out in this part. Unfortunately, plumbers and contractors go through hardships when installing a skirted toilet.

They can work comfortably in an open space but a skirted toilet can hinder them. This type of toilet occupies a lot of space despite the manufacturers’ effort to make it easy for installers. To prevent skirted toilet problems, you must hire an expert to do it for you.

The wise decision that you make should also include the ideal size of the trapway. Don’t just focus on the sleek look alone. The recommended trapway size is 1.5 inches but you can find toilets with 1.75 or 2 inches trapway these days.

Looking at the Non-skirted Toilet With Exposed Trapway 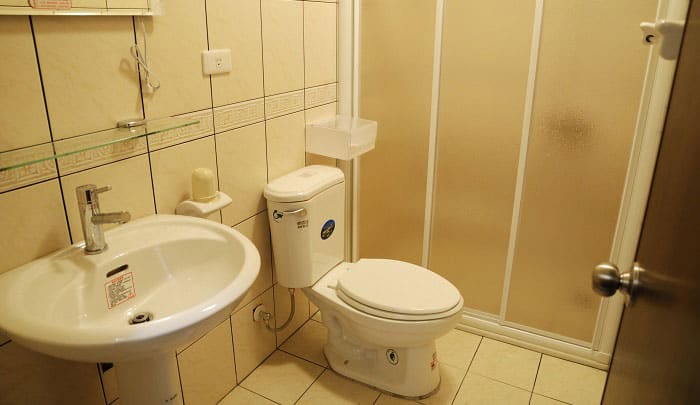 It can be interesting and one of a kind. Some caps envelop the bolts that hide the screw of the toilet on the floor. It can give the entire bathroom a tidy, streamlined look.

If an exposed trapway doesn’t bother you or get in your way, it’s not a problem with the toilet’s operation. The American National Standards Institute mandates that trapways should be at least 1.5 inches. Nevertheless, manufacturers exceeded it as trapways are around 1.75 or 2 inches.

Hybrid toilets are available so you can’t always see a non-skirted traditional toilet. But you can see a skirted one. The best examples for this are Kohler’s San Souci and Kathryn.

In these toilet models, the trapway is hidden. Kohler sees the additional bulk like the skirted toilet structure. Thus, it just tucks in the trapway behind the toilet without an apron. Eventually, it creates a classic but elegant look. There’s no flat skirt but the trapway is not that apparent compared to the original structure of a regular toilet.

The exposed trapway with crook and cranny causes the struggle that most people experience when cleaning the toilet. In addition, it gets dirty easily so you can’t just ignore the demand for cleaning.

Thus, house owners find relief in the flat surface of the skirted toilet during cleaning time. They can save time as a simple wiping finishes the job. Even though some traditional toilets have a skirted design, it’s still challenging to clean because they have ridges and tons of details.

However, traditional toilets with skirted designs are easier to clean than their non-skirted counterparts.

The skirted toilet is the perfect item to establish a modern appearance. Since it has a sleek look with a flat surface, it matches well with the contemporary style. While it blends with the said interior, it remains simple because it doesn’t grab much attention.

This feature becomes popular and goes along well with the minimalist perspective. The simple style is missing among older toilets that are usually non-skirted. This trend started around the 2010s.

Concealment of some parts

This part is not exactly about cleanliness but it’s more from a design perspective. It can be denied that an exposed trapway is an eyesore in a newly renovated bathroom. Modern toilet innovation is embraced in the US so this factor is connected with the standard outlook towards modern bathrooms.

The apron on a skirted toilet doesn’t only cover the trapway but it’s useful in other parts. Tubing or toilet supply is also kept hidden. When you have a skirted toilet, you’ll get to obtain the hidden compartment for Johnny’s bolts.

Moreover, new toilets have curve openings where installers can directly reach for the supply that’s placed behind the skirt. It may not be that much but this space gives you the chance to hide the plumbing.

You can link this skirted feature to the wireless trend at the present. It’s similar to the intention of keeping the wires of your TV. Likewise, you want to tuck in some parts of your toilet for the observance of orderliness.

Behind the latest and good features of a skirted toilet, expect to pay more for them. You’ll find non-skirted toilets cheaper. Since the popularity increases, some are hopeful that one day the price will decrease.

If you’re price-conscious, dependable toilets produced by reliable manufacturers are available in skirted and non-skirted styles. Some examples are Toto’s Drake II and Vespin, Kohler’s two-piece and skirted Cimarron, and American Standard Cadet 3 and skirted version.

If you look at the structure of these toilets, it’s undeniable that the skirted toilet is bulkier than the regular one. Looking deeper into its function, you won’t find any difference between these two types of toilets. The apron is the only additional component on the skirted toilet.

However, both of them are bulky so manufacturers came up with a great idea to associate the skirted style on a traditional toilet. Though their theory seems ideal, this style still falls short of being a true skirted toilet.

Before you proceed to compare skirted vs non-skirted toilets, make sure you’re aware of the ideal trapway size so you’ll choose a toilet that flushes well. If you’re after a sleek and modern look then the skirted toilet is for you. It’s fine to go for a non-skirted toilet when you prefer the classic look. Moreover, you may check the skirted traditional toilet to see if it matches your taste.

Toto vs American Standard Toilets: Which Toilet is Better?

Can Adults Use Baby Wipes Instead of Toilet Paper? (Things to Know)