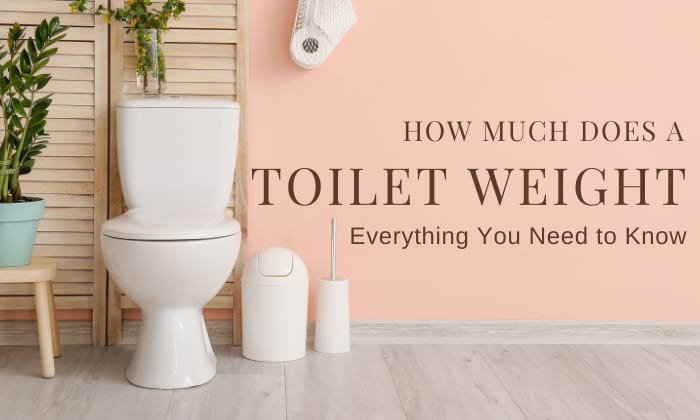 A toilet looks heavy at first glance, so one could imagine it will be challenging and require extra work to transport it from one location to another. So, how much does a toilet weigh?

For your information, the standard toilet weight on average is roughly 95 pounds and can range from 70 pounds to 115 pounds. The type, brand, size, and materials used to make a toilet can all affect its weight.

How Heavy Are Toilets?

Since each toilet model has a distinct configuration, it stands to reason that their weights would also vary.

A typical two-piece toilet bowl weigh around 50 and 60 pounds, whereas the tank is typically between 25 and 40 pounds.

These toilets have a bowl and a tank detachable from one another, making them easier to move or transport. This characteristic explains why the item’s weight has three possible values: tank, bowl, and overall weight.

A one-piece toilet weighs from 80 to 120 pounds, with an average weight of 99 pounds. This toilet style appears to be heavier than a two-piece toilet because the toilet bowl and tank are joined as one unit and cannot be detached.

A wall-hung toilet, which weighs between 50 and 76 pounds, is the lightest of the four types of toilets. Wall-hung toilets traditionally only had a bowl, with the tank and other components hidden behind the wall.

Since it is installed on a wall as opposed to being laid on the ground, it is logical that it would be lighter and more compact than its counterparts. 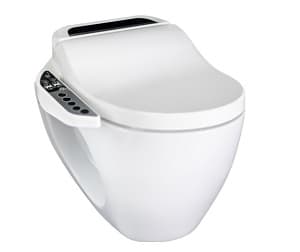 The majority of popular Smart toilet models weigh in at 90 to 120 pounds. Toilets of this style are quite heavy even though they are compact and don’t have a tank because of added features.

The additional features, like the heated seats, music player, bidet, and others, make them substantially heavier than conventional toilet designs.

While toilets may look comparable in terms of their styles, it is to be expected that they will still weigh differently. The manufacturing methods used by various toilet manufacturers differ, which in turn affects a toilet’s weight.

Toilets made by Kohler are thought to weigh between 90 and 110 pounds. One of its models with the best visibility, the Kohler Highline, weighs up to 95 pounds.

A TOTO toilet can weigh anything between 90 and 130 pounds. The TOTO Neorest 700H Toilet, a smart toilet and one of its best-known products, weighs around 125 pounds.

Glacier Bay toilets usually have a weight of around 70 to 90 pounds. The company’s White High-Efficiency Dual Flush Complete Elongated Toilet, which is the lightest on the market in terms of energy consumption, weighs roughly 90 pounds. 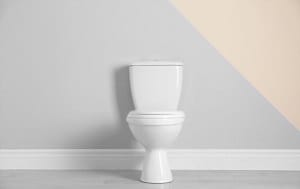 Toilets are commonly made from ceramic, porcelain, and vitreous china. These substances are flawless, non-porous materials that uphold strict hygienic standards, maintain freshness, and give your restrooms a refined appearance.

There are toilets made of steel and plastic. These toilets naturally weigh substantially less than the more common materials above.

A toilet’s weight may increase or decrease based on how much of these materials are in it.

The weight of your toilet is also affected by its size. The average size of toilet models is 29 inches in depth, 20 inches in width, 30 inches in height, and 12 inches rough-in. These average toilet dimensions and measurements have a standard weight of about 95 pounds.

Without a doubt, a tall toilet with a large body weighs more than a toilet type that is sleek and small. For instance, the 24.5-inch Small Galba toilet weighs only 80 pounds, compared to the 95 pounds of the 22-inch high Signature Hardware Bradenton.

Can one person lift a toilet?

Yes, one person can handle the weight of a toilet. Toilets typically average 90 pounds and can weigh anything from 60 to 120 pounds. Average American men can lift 155 pounds, while average American women typically handle 90 pounds.

Do you need a plumber to replace a toilet?

If you are knowledgeable and skilled in installing and removing toilets, you may be able to complete the task alone. But in order to have the work done more expertly and effectively, it is always better to hire a plumber.

Do toilets have weight limits?

How much does a toilet weigh in kg?

The weight of a standard toilet ranges roughly from 27 kg to 55 kg. Conventional toilets have an average weight of 40 kg.

How much waste can a toilet flush at one time?

Toilets can now flush with approximately 1.30 gallons. This value can be converted to the toilet flush weight of 10.80 pounds.

The weight of the numerous bathroom accessories and equipment should be taken into account while developing your bathroom and making construction plans. Of course, this includes one of the most fundamental bathroom necessities, a toilet.

When planning your bathroom’s layout and setting aside money for labor charges, it is advantageous to be aware of the weight of the toilet model you select.

The responses to average toilet weight can be intimidating, but it’s something you can learn from to ace your toilet and bathroom ideas!

Wet Wipes Vs Toilet Paper – Advice From the Experts

Why Does My Toilet Keep Clogging? (6 Common Reasons)